The Chamber of Industry of Guatemala, CIG, inaugurated the ESCOLÍN 1995 program to deliver school supplies to 35,000 children from 300 public schools in the country. The program is nine years old and has benefited 259,000 students. In the graph, the president of CIG, industrialist Juan José Gutiérrez, gives a school bag to a student of the Miguel García Granados National School for Girls, in Guatemala City. (Photo PRESS FREE, by Daniel Herrera).

Thirty-five thousand children from 300 schools throughout the country will benefit from school bags from the educational program of the Chamber of Industry “Escolín, Nuestro Aporte para el Futuro” (Escolín, Our Contribution to the Future), whose symbolic delivery took place yesterday at the Miguel García Granados school, located in 13 avenue and 4th Street, zone 1 in Guatemala City.

The president of CIG, Juan José Gutiérrez, stated that he firmly believes that the school bag represents the seed of knowledge and the fight against illiteracy, to harvest Guatemalans educated and capable of joining the effort to remove the country from the list of underdeveloped nations.

He assured that the Chamber has always been mindful and aware of the work it needs to do to benefit the community, and thus directly support the education and culture of Guatemalans.

One of the main objectives of “Escolín” has been to reduce the high dropout rates, and for this, each child is given a bag of supplies to encourage them and help them with their school work.

“We believe that illiteracy is a great obstacle to the development of our country, especially in the current era, in which knowledge and to the ability to do things represent the main competitive advantage of developed countries,” he said.

When addressing the children, he asked them to put a lot of interest and dedication, and to pay attention to their teachers, to do their part to become, in the near future, good and productive men and women.

He urged teachers to continue with their dedication, since it is largely up to them to shape the future of new generations, an investment that will pay off in the long term.

Escolín began in 1987 with the Basic Basket project, the objective of which was to provide supplies to first grade students in public schools in the metropolitan area of Guatemala City. In 1991 it took on a new personality and “Escolín” was born, aimed at children and teachers in public schools throughout the country as a contribution to the modernization and improvement of teaching.

The “Escolín” program consists of giving each child in the first grade of primary school a backpack with: a reading book; a workbook, “Friend”; a 40-sheet notebook; a 100-sheet grid notebook, a 100-sheet double-line notebook; a box of crayons, a pencil sharpener; two pencils and an eraser.

“In addition, each teacher is trained in the use of the Amigo educational package and they are given support teaching material,” Gutiérrez reported.

The symbolic delivery was made by the president of CIG, Juan José Gutiérrez to young students of the Miguel García Granados school, located at 13 avenue and 4th Street zone 1 in Guatemala City.

The “ESCOLÍN 1995” program, Our Contribution to your future, was inaugurated yesterday by the Board of Directors of the Guatemalan Chamber of Industry, CIG. It will benefit 35,000 first grade children from 300 public schools throughout the country, who will receive bags of school supplies donated by more than 500 Guatemalan companies.

The president of the Chamber of Industry of Guatemala CIG, Juan José Gutiérrez, stated in his inaugural address that, during the nine years that the project has been in place, more than 259 thousand children have received school supplies, and the plan is to benefit 35 thousand more students this year.

Referring to the program, Gutiérrez stated: “the members of the industrial sector firmly believe that each school bag delivered represents the seed of knowledge and the fight against illiteracy, to, in a near future, harvest Guatemalans who are educated and capable of joining the effort to remove Guatemala from the list of underdeveloped countries”.

Likewise, he pointed out that the Chamber of Industry has always been mindful of the work it needs to do to benefit the community, as part of Guatemalan society, and “Escolín” is only a way of directly supporting education and culture, through the fight against illiteracy, one of the worst evils that the country faces.

With this, it also seeks to contribute to the modernization and quality of teaching in Guatemala, and to the development of values and principles in childhood, contributing to their personal education through concepts of peace, freedom and work, included in the material that is given to them.

Finally, it was reported that the content of the School Bag is this: backpack, pencil sharpener, eraser, two pencils, a 100-sheet grid notebook, a 100-sheet double-lined notebook; 40 plain paper notebook; a “FRIEND” Workbook. Teachers are given a didactic guide, a set of flash cards and a jar of glue.

Immediately after the inauguration of “ESCOLÍN 1995”, the Board of Directors of CIG went to the Miguel García Granados National School for Girls, No. 5, located at 13 avenue 4-78, zone one in Guatemala City, where the first lot of backpacks with school supplies were given to first-grade primary school students.

The schoolmaster, Ms. Elizabeth Bonilla de Jaramillo, expressed her gratitude on behalf of the students and parents, “because the Chamber of Industry has always taken us into account as beneficiaries of this program that contributes greatly to the student population of the school, children of limited economic resources, she said”. (jeg) 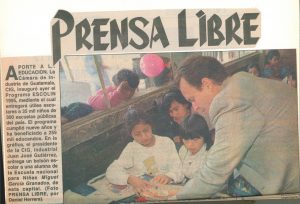 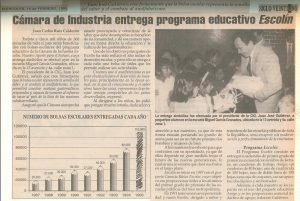 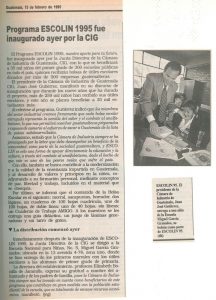