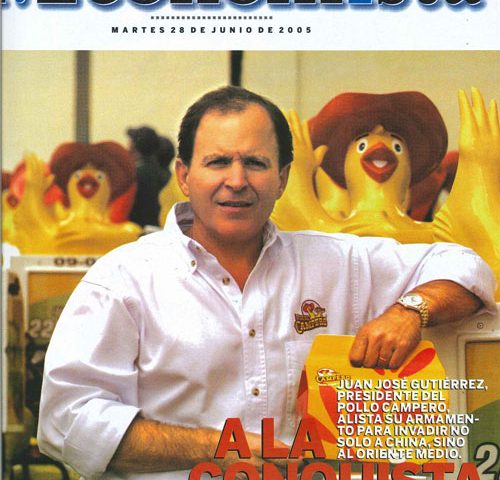 To the conquest of Asia

JUAN JOSÉ GUTIÉRREZ, PRESIDENT OF POLLO CAMPERO, SHARES HIS STRATEGY TO CONQUER NOT ONLY CHINA, BUT THE MIDDLE EAST.

Armed to the bone in Asia.

Fire will open in the Middle East, its flames will serve to prepare one of the most coveted recipes by chicken consumers: that of the Guatemalan chain Campero. Juan José Gutiérrez is committed to having the same success in Asia.

A battle took place in the kitchen of the Middle East. A group of trademark pirates carried out a surprise attack in which they tried to turn a simple dish into an authentic chicken dish from a company that was born on the other side of the world, in Guatemala, but whose fame seems to be widespread in the Arab world: Pollo Campero.

It was not possible to falsify the Campero flavor, and the event produced a vain illusion among Arabs eager to have in their lands that fried chicken which a group of men led by Dionisio Gutiérrez devised 35 years ago.

The “chick” symbol, which represents the chain, crosses its arms in outrage on the company’s website, where the warning of the pirate attack still remains. No further details are known about this, and the president of the Campero system, Juan José Gutiérrez, simply says that the matter “is already resolved.”

Undoubtedly, the mysterious recipe that has conquered Central America and that causes 300-meter queues outside the restaurants of the United States’ chain, remains anonymous and remains an ambition for the Middle East.

What’s more, an Arab businessman offered Gutiérrez $12 million for the formula to prepare the famous chicken. Gutiérrez obviously did not agree to sell the secret that his father bequeathed him.

He executed his own strategies to appease hunger in the Middle East.

He sold the franchise to a group of entrepreneurs who are ready to conquer that area. Kuwait, Jordan, Cairo and Lebanon are the territories that are being targeted for a first foray.

But Campero has asked franchisees for a break. Arabs will have to settle for cravings instead of chicken for a year and a half more.

The reason? Campero needs time to position itself in its next conquest: China.

In December of this year, it will become the first Central American fast-food chain to enter the Asian country.

Shanghai and Beijing will be the first provinces to have the unmistakable aroma on their tables. From there, Campero will expand to the entire market with at least 500 restaurants.

The origin of a phenomenon

Like any Central American, no matter how far away you live, Campero will not stop keeping its own land in mind.

Expansion plans in the region are strong, especially in El Salvador and Guatemala, where the chain has been a resounding success and now has 55 and 90 restaurants, respectively.

The system has developed so strongly in both countries that there is sometimes confusion over which of the two countries the company originated from.

“Campero is Salvadoran, I say so too, and in Guatemala I say that Campero is Guatemalan, because Campero cloned itself”.

How is your expansion plan for Pollo Campero going?

We are expanding in Latin America, finishing our consolidation in Central America, which is our base. In the next five years we will open 30 restaurants in El Salvador and no less than 80 in the region. We are growing in Mexico.

What are your plans for Mexico?

150 restaurants. The United States is very important; We have 20 restaurants and an expansion plan is beginning that will take us to 250 restaurants in China, in Shanghai, in two years. From there we will develop the Middle East and Europe later on. China is today the most important target.

How long do you expect that it will take to develop that area?

There are investors who are prepared to open 450 restaurants in five years, in China, in provinces such as Shanghai, Nitin, Guangdong …

We are going to Indonesia too, to Jakarta, with 100 restaurants, and the Middle East in a second phase.

Did I ever talk about Kuwait?

Kuwait is a very rich but very small country, and it will always be in our radar. Now is not yet the time. Kuwait and the Arab world, the Middle East, do not have the potential that China has today. China is the market that we all turn our eyes to, and because of the preference by their people for chicken, we are convinced that there is a good opportunity for Campero.

Has the Campero recipe already been tested with the USA Eastern Coast population?

In the US and in China we have validated the concept, the flavor and the Campero name. We are signing a contract, and the first restaurant opens on December 7 or 8.

I imagine it is the million-dollar question, but who made the recipe?

The person who started it is gone: my dad, the first president of Campero, Dionisio Gutiérrez, in 1971.

Have you calculated the value of that recipe?

In raw materials it is not worth more than $ 4 a pound, but the commercial value of the formula could be well above what we might imagine. We have never done the calculation, but my point of reference is an Arab businessman who wanted to buy it and offered $12 million. Obviously, we didn’t sell it to him.

Does the Arab world still have to wait any longer for you to arrive?

At least one year.

Which countries would they reach first?

Kuwait, Jordan, Cairo and Lebanon are countries/cities where we plan to start.

In El Salvador: a total of 55 restaurants and projections of opening 30 more in the next five years.

“We have never calculated how much the recipe is worth. My only point of reference is an Arab businessman who wanted to buy it from me for $ 12 million. “