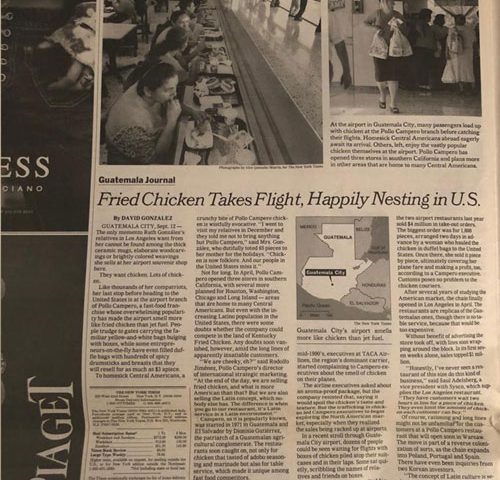 GUATEMALA CITY, Sept. 12 – The only souvenir Ruth González’s relatives in Los Angeles want from her cannot be found among the thick ceramic mugs, elaborate woodcarvings or brightly colored weavings she sells at her airport souvenir shop here.

They want chicken. Lots of chicken.

Like thousands of her compatriots, her last stop before heading to the United States is at the airport branch of Pollo Campero, a fast-food franchise whose overwhelming popularity has made the airport smell more like fried chicken than jet fuel. People trudge to gates carrying the familiar yellow-and-white bags bulging with boxes, while some entrepreneurs-on-the-fly have even filled duffle bags with hundreds of spicy drumsticks and breasts that they will resell for as much as $3 a piece.

For homesick Central Americans, a crunchy bite of Pollo Campero chicken is wistfully evocative. “I went to visit my relatives in December and they told me not to bring anything but Pollo Campero,” said Mrs. González, who dutifully toted 65 pieces to her mother for the holidays. “Chicken is now folklore. And our people in the United States miss it.”

Not for long. In April, Pollo Campero opened three stores in southern California, with several more planned for Houston, Washington, Chicago and Long Island – areas that are home to many Central Americans. But even with the increasing Latino population in the United States, there were some doubts whether the company could compete in the land of Kentucky Fried Chicken. Any doubts soon vanished, however, amid the long lines of apparently insatiable customers.

“We are cheeky, eh?” said Rodolfo Jiménez, Pollo Campero’s director of international strategic marketing. “At the end of the day, we are selling fried chicken, and what is more American than that? But we are also selling the Latin concept, which nobody else has. The difference is when you go to our restaurant, it’s Latin service in a Latin environment.”

Campero, as it is popularly known, was started in 1971 in Guatemala and El Salvador by Dionisio Gutiérrez, the patriarch of a Guatemalan agricultural conglomerate. The restaurants soon caught on, not only for chicken flavored of adobo seasoning and marinade but also for its in-table service, which made it unique among fast food competitors.

Today, the chain has 73 outlets in Guatemala and nearly 100 in the rest of Central America and Ecuador. In rural parts of the country, executives send mobile kitchen and counter for special events, a service that also allows the company to test potential new markets.
A similar close-to-the-ground savvy spurred the decision to open the United States restaurants. In the mid-1990’s, executives at TACA Airlines, the region’s dominant carrier, started complaining to Campero executives about the smell of chicken on their planes.
The airline executives suggested an aroma-proof package, but the company resisted that, saying it would spoil the chicken’s taste and texture. But the volume of chicken being flown led Campero executives to begin exploring the North American market, especially when they realized sales being racked up at airports.

In a recent stroll through Guatemala City airport, dozens of people could be seen waiting for flights with boxes of chicken piled atop their suitcase and on their laps. Some sat quietly, scribbling the names of relatives and friends on boxes.

Maria Josefa Garcia waited for her flight to Boston with 51 pieces of chicken, destined for her son and his friends. Even though she had an eight-hour trip ahead of her, with connections, she said the chicken would be happily devoured once reheated.
Although Campero executives would not disclose total sales for the privately held company, they said the two airport restaurants last year sold $4 million in take-out orders. The biggest order was for 1,600 pieces, arranged two days in advance by a woman who hauled the chicken in duffel bags to the United States. Once there, she sold it piece by piece, ultimately covering her plane fare and making a profit too, according to a Campero executive. Customs poses no problem for chicken couriers.

After several years of studying the American market, the chain finally opened in Los Angeles in April. The restaurants are replicas of the Guatemalan stores, though without table service, because that would be too expensive.

Without the benefit of advertising, the store took off, with lines soon wrapping around the block. In its first several weeks alone, sales topped $1 million. “Honestly, I’ve never seen a restaurant of this size do this kind of business,” said Saul Adelsberg, a vice president with Sysco, which supplies the Los Angeles restaurant. “They have customers wait two hours in line for a piece of chicken. They even limit the amount of chicken each customer can buy.”

Of course, rationing and long lines might not be unfamiliar for the customers at a Pollo Campero restaurant that will open soon in Warsaw. The move is part of a reverse colonization of sorts, as the chain expands into Poland, Portugal and Spain. There have even been inquiries from two Korean investors.

“The concept of Latin culture is seducing the world,” Mr. Jiménez said. “It has gone beyond borders. When you see us in Poland, it’s not Pollo Campero that attracts them, it is Latin culture that attracts them. We are the only authentic Latin American chicken.” There is only one more border to cross, and it is a symbolic one. “Kentucky? I don’t think so,” Mr. Jimenez said. “Not yet.” 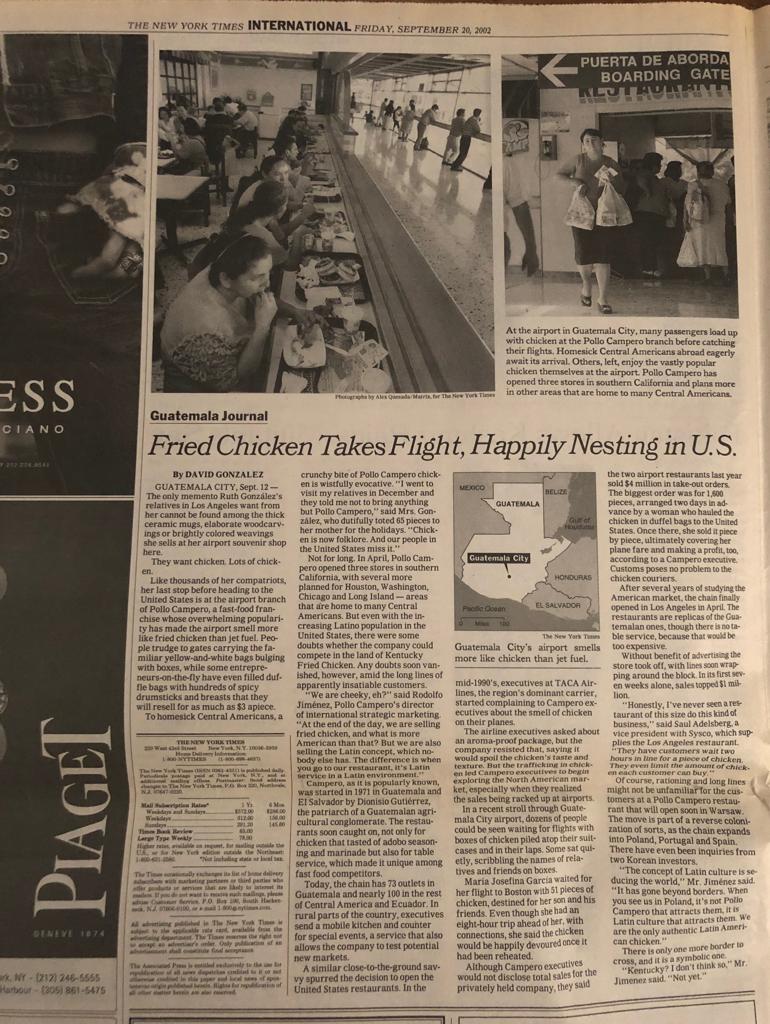